What Are We Doing Wrong with Biofuels?

My friend sent me this article on how biofuels are responsible for a 75% increase in world food prices.

My response: This is what happens when you live in denial for 100 years, and establish an infrastructure around a fuel source that doesn't really "exist" (the sun is the only "real" energy source we have, but that's another discussion). When it starts to run out, everything destabilizes, which is what we are seeing. The obvious choice, which is not always the best choice, is to look for the most accessible, drop-in renewable alternative .

What are doing wrong with biofuels?

Ethanol has been the biofuel of choice by many, which is a ridiculous fuel. It takes a lot of energy to distill it, and the resulting fuel has a miserable energy density. There are far better ways to get fuel from plants, unfortunately most are not usable by gasoline cars (see #3)

2. We're making them in a reactive and irresponsible way.
Since we haven't built up an infrastructure that produces biofuels in a responsible and distributive way, the only alternative is to utilize the same resources that have been devoted to producing food. The government is now throwing tons of money at farmers to produce ethanol. If anything, it's easier for them because there are fewer regulations.

3. We're using them incorrectly.
Cars that carry their own power plants (gas/diesel engines) are only about 7% efficient. "Real" energy sources can't be held responsible for producing the amount of energy we traditionally waste. We need electric cars and trucks. Electric vehicles leave the energy conversion process to centralized power plants, where it makes sense to invest the money to make very efficient processing. Furthermore, a wide variety of energy sources can be brought into play, and even mixed, at a powerplant (solar, hydro, petroleum, wind, etc.). This gives you a more flexible infrastructure, so we can be opportunists as different energy sources rise and fall in their availability.
Posted by Scott McGrath at 12:52 PM No comments: 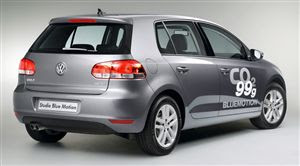 What do you get when you combine the winning combination of a smaller (1.6L) common-rail turbodiesel engine with a revised ratio 5 speed transmission, and a particulate filter? 74 MPG, and only 99g/km of CO2, thanks to the 2009 VW Golf Bluemotion. This car still has 104 HP (184lb/ft), which is more torque than some gas compact cars have now- and you can bet that those numbers will all but double with a few basic fuel and air mods.


In terms of mileage and emissions, this car puts some hybrids to shame- yet with its simplistic design, it will remain much more affordable (£15,500 starting) than cars with complicated hybrid technology. There is no word as to when this car will be brought to the U.S. (as usual), especially with oil prices dropping again, but at least we can have the comfort of knowing it's out there.
Posted by Scott McGrath at 9:23 AM No comments: