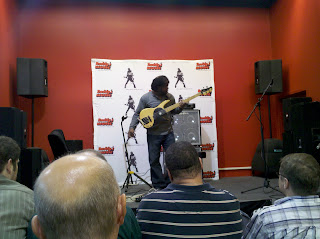 
Figuring on the opportunity to meet and get to know some of other bass players in the area, I arrived rather early.  Sure enough, I recognized several players from the area, including Thom Carvey, Billy Dorsey, Aram Bedrosian, a guy named "Rudy" (I've never known his last name) and several others.  I even ran into the guy that sold me my upright bass last year, and chatted with him for a while.

As you might expect, the pre-clinic scene was fortified with noodling and slapping on store gear by a few of the more brazen veterans present.  This was combined with convivial discussions about everyone's gigs over the last week, as well as others in quiet observance/wait for the promise of Wooten's arrival.  When he did quietly appear on the small stage (obviously coming in from the employee back room), and began setting up his well-known Fodera "Yin Yang" bass, the scene didn't really change much.  I noticed a few breaks in conversations to insert an indicative nod in Wooten's direction, but other than that, people seemed unaffected by the celebrity's arrival.

After he finished setting up, he walked out the front door of the store, apparently to Starbuck's to grab a coffee.  While he was out, most of us (about 30-40 in attendance total) found our seats and the jovial chatting between acquaintances continued.  He eventually came back in, and did what appeared to be some shopping over at the music store counter. He was inquiring about a pedal that would offer a certain kind of compression pedal that could be tweaked to  provide additional of sustain for the note, but without actually squashing the initial attack much. A Boss CS-3 came to mind, but I guess they didn't have one at the store.  I assume he was looking for something for the purpose of the clinic, as I imagine he has access to arsenals of such gear when in his normal element.

Wooten jumped up on stage and everyone fell silent as he proceed to "rip it up" for the next 10-15 minutes.

He made heavy use of a Boss RC-50 looper, demonstrating an obvious practiced facility with the pedal.  Many times he recorded a loop layer, pressed a pedal to lock it down, and immediately proceeded to play/record another layer without taking anytime to listen back to the previous.  All the while, Wooten's playing was as innovative and unorthodox, yet always musical, soul filled, and swing induced, as in his signature style.

After Wooten finished his first performance for the group, he asked,

"Why are each of you here today? What do you hope to get from this session?  I'm just curious, that's all".

A number of responses followed, most of them centered around, "learn how to play some new chops."
"Get some pointers."
etc., etc. 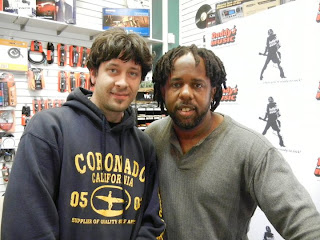 He then asked, "How many people brought a notebook?"  Only a few of us raised our hands.   He then asked, sternly, "So how do you expect to learn or get something out of this session, to take full advantage of this opportunity, if you didn't bring something to take notes on?"  He then proceeded to lecture the somewhat stunned room full of bass players about this.

"Your first lesson today is about not missing opportunities to learn."

The lecture seemed a little harsh, especially considering the caliber of some of the musicians that were present in the room, but Wooten's point was clear.  He is serious about giving people real teaching value at a clinic, rather than a watch-the-celebrity-rip-it-up, shake hands, and go home affair.  He went on to other topics, allowing the crowd to ask questions and steer the discussion.  The topics ranged from what it was like to be on tour, to how he composes music, and how he got the gig with Bela Fleck back in the day.

"I don't care how impressive you are at playing bass.  You have to be a whole person.  If you are going to be a touring musician, you have to be the kind of person people can stand being on a bus with for 12 days.  Right?  You have to bathe..."

He continued to take more questions from the audience.  One younger gentleman in the back asked, "Can we watch you rip it up on the bass for a few minutes again?"

"Why?", Wooten responded.  You can look it up and watch that on Youtube.  I'm happy to do it, but think about this: I don't know when we will have this chance again.  Is that what will give you the most value out of this time we have together?"

Wooten made sure to drive home the point that being a successful bass player is more than being able to do crazy moves.

"For the most part, the only people you impress by playing a lot of busy notes and chords are other bass players.  Bass players aren't going to hire bass players for a gig."

At the end of the clinic, before many of us took the opportunity to get autographs on photos and bass guitars, he did indeed "rip it up" for one more time.  His playing impressed all the bass players, but I think anyone else there would have felt the same way.
Posted by Scott McGrath at 11:09 AM

Nice, Scott. Thanks for posting.

Loved it Scott ! Thanks for bringing your notebook ! :)