After recently acquiring a Shure SM7B, my first "big boy" microphone, I decided to do some tests so I could get familiar with its characteristics.  I'm posting some of my tests online along with some of my conclusions as I go. 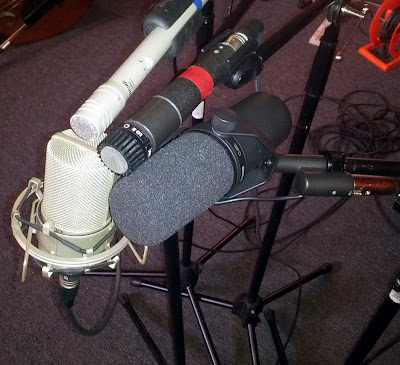 This microphone is basically an age-old SM7 with a few minor updates, including shelving EQ switches.  The SM7 was originally designed for broadcast use, with good shock mounting to prevent floor and handling noise from conducting through the mount.  It is very directional to reject noise other than the speaker, and has a with a forgiving, subtle onset of the "proximity effect" (the loud, often sudden bassiness that happens when someone sings or speaks too closely into a directional microphone).  The disadvantage is that it's pretty big, heavy, and somewhat expensive, so it's probably not a great choice to use on stage.  The SM7B retails for around $400-$500.

This is pretty much the most popular microphone in the world.  It is designed to be rugged, pick up only what's in front of it (good for stage use), and be generally versatile.  It also does so inexpensively, at about a $60-90 retail price.  It's a dynamic microphone, which means it does not require phantom power.  I'd be lying if I told you this SM57 had seen no road use, but of course I always take the best care of all of my road gear ;)  It's vocal counterpart is the SM58, the difference being the addition of a ball windscreen.

A condenser requires phantom power, but has a lot more sensitivity than a dynamic, especially in the highs.  They are better at picking up very subtle nuances, and bring about that "sparkly" high end when you are recording stringed instruments. This higher level of sensitivity generally means that the microphone is not suitable for stage use (do to increased feedback concerns).  The SM81, however, has excellent directionality, and the ability to roll off undesired frequencies via a small switch.  It is surprisingly forgiving when it comes to feedback production - Marshall Paulsen of Longford Row uses it regularly on stage as a banjo microphone, with no trouble.  The SM81 retails for $350-450.

This is a low cost, medium diaphragm condenser (MDC) microphone.  (Note: It is sold as a large diaphragm condenser, but with a diameter of 17mm it technically falls a little short of that description.  However, it still does the job of an LDC, so we're really splitting hairs).  A large diaphragm condenser has excellent bass response and overall sensitivity, since the larger surface area of the diaphragm is able to convert longer wavelengths.  For the same reason, they are also more susceptible to popping noises when recording singing or talking (see "pop filters" for more info).  This microphone retails for the a fairly remarkably low cost of $60-100, making it one of the cheapest, if not the cheapest, condenser microphone available.

The test material is an entry level Washburn acoustic guitar played using a heavy pick (it's what I had around), with the sound hole approximately 4 inches from the mics, and about 15-30 degrees off-axis. 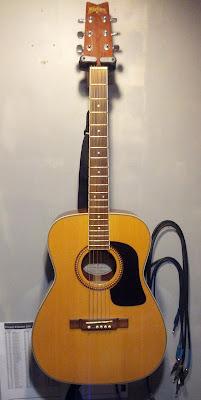 The microphones were fed into an unmodified SMPro Audio PR8.  The gains were set as shown to achieve a fairly even signal on all channels, so this will give you some insight as to the relative sensitivity of the mics:

Where applicable, all mics with (built-in) configurable shelving EQs were set to flat.  This includes the SM7B and the SM81. I was a little surprised to see that the SM7B needed more preamp gain than the SM57.  It's important to get a nice strong acoustic  and/or quiet preamps for this mic.

SM7 - The first case was the SM57.  Not bad overall quality, but it sounds sort of thin and dull.  There is a lack of low end.

SM7B - A big difference. The SM7B has a lot more low end, and overall depth.


SM81 - You can definitely now hear the high end "Sparkle" that a condenser has.  Low end is not bad.

MXL 990 - This mic's sound is almost indistinguishable from the $350 SM81, especially in the highs.  However it even has a little bit more depth.  Not bad for a mic that is well under $100.

In summary, if it was fair to compare condensers and dynamics, it looks like the winner of this shootout is the MXL 990 for price vs. sound quality.  However, if you need a nice dynamic mic and you aren't too worried about the cost, the SM7B is the clear winner.