One of my ongoing battles with my Gnex is the charging port.  In the past, it has stopped working, and after lots of Google searches, I found out that a common issue is the little inner tab not making contact with the cable (fixed by bending it up slightly).

After a recent vacation, I found once again that my phone wouldn't charge.  This time, it seemed that the charging port was somehow mutilated, and the cord didn't seem to go in correctly.  The contacts were bent inside the phone.  I don't have the insurance, and I'm kind of used to being on my own warranty after rooting, ROMing, etc.  After researching, I promptly ordered this replacement USB flex board, for about $50 w/ shipping, and replaced the board following this iFixit how-to. 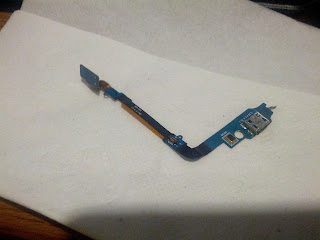 The procedure was a little tricky, but not too bad. In general everything felt like it went smoothly, and I expected no issues.   However, after putting the phone back together, the phone still wouldn't charge.  I disassembled the phone again, double-checked all my connections, and tried multiple cables.  It's a very curious (and frustrating) issue.

After some more thorough testing, the situation seems to be as follows:


So that rules out pretty much everything as I understand how the port works.  I could see maybe some of the pins not working in the port, but the 12V charger and the wall charger should be using the exact same pins, so I can't see how only the wall charger would work.  And above all, I don't see how a brand new replacement part, with such a straightforward replacement process, would fail to work in any way.

Not really sure what I'm going to do.  The temptation is to buy a used replacement off eBay, they seem to be selling for around $250-$300.
Posted by Scott McGrath at 11:21 AM