In for repair we have a Kurzweil 88-key K2500X, with weighted keys.  This beast weighs about 80-100 lbs. It had reportedly fallen off a keyboard stand.  It came in with several "sticking keys", one chipped key, dented front, and a broken end cap. 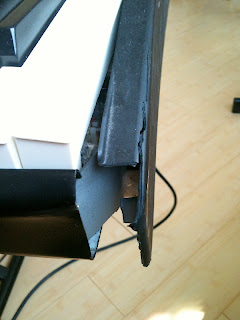 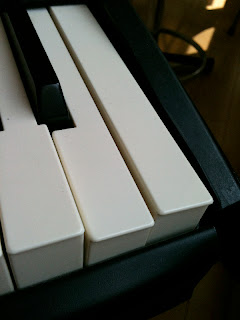 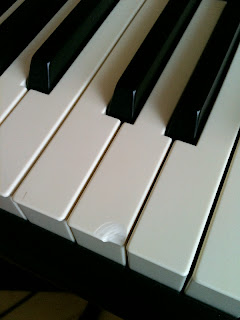 I wasn't sure how I was going to handle it until I got the thing apart.  First task was to figure out how I was going to work on it by myself.  It's pretty difficult for one person to lift, let alone maneuver about so I could get to the screws in the back.  Finally figured out that saw horses were perfect.  Stable, wide enough for both halves, and allowed me to access both sides without having to flip it over.  About 35 screws later, I had the case apart.

The sticking keys turned out to be because of the dented front.  With a hammer, pliers, and some spray paint I had the front back in shape.  The keys were probably back in alignment and wouldn't stick anymore, although I wouldn't really know for sure until I got it back together.  After researching online, I found a place that supposedly sold the parts to fix the rest.  Ordered a replacement key and end cap.  2 days later, got an e-mail saying the end cap was not available anymore.  I called a list of Kurzweil dealers I got from the website.  All of them had the same story: the end caps are discontinued.  The key was apparently used stock, so it was still available.

I got the replacement key and was able to change it, but the end cap was up to me.

Thought about using fiberglass, but there wasn't really enough of a surface for the glass to get a grip on.  First attempt was to make a mold using clay and pouring in plastic: 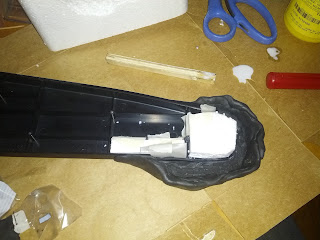 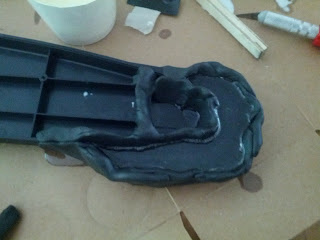 This ended up failing, partly because I got the mixture wrong, partly because of a profile/relief issue, preventing the correct height from being reached during the pour.  Finally decided to go with epoxy putty.  After basic forming, and a ton of sanding, this is where we are at: 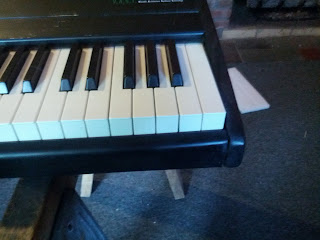 And finally some touch up and alignment work: 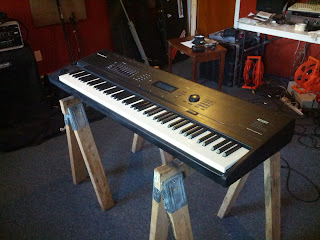 Came out pretty good - no one would know anything happened to this machine unless they were looking for it.