Review of the Gallien Krueger MB212

As a new Dad, I recently relieved myself (and my back) of much of my former bass gear, which included Hartke 2x10 and 4x10 cabinets, a 2x10 Mesa Boogie combo, outboard preamp and Hartke head mounted in a rack case, a massive powered Yorkville sub, and more.  All of this I traded for a single 2x12 combo: the Gallien Krueger MB212.  500 watts, 37 lbs., fits easily behind the driver seat of my car.  The size and weight is nothing short of a dream - but my big question was, of course, going to be - what about the tone?  Last night I had my first gig with it. Here's a look at my experience.

Read more »
Posted by Scott McGrath at 10:39 PM No comments:

That's right, the title of this post is not a typo.  You should strongly consider disabling all of your Facebook privacy settings; by that I mean making them the most publicly visible (to the entire internet).  To see why, read on.

Read more »
Posted by Scott McGrath at 12:08 PM No comments:

New tires for the E-bike 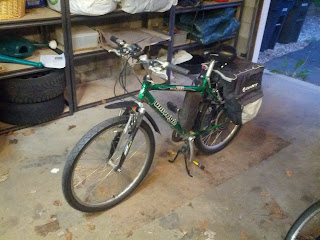 Read more »
Posted by Scott McGrath at 11:10 PM No comments:

Email ThisBlogThis!Share to TwitterShare to FacebookShare to Pinterest
Labels: e-bike

Today, both my desktop (Windows 8 Home Premium) and my laptop (Windows 7 Home Premium) shutdown and rebooted to install Windows updates WHILE I WAS USING them.  Yes, sitting there, typing, not idle, not at 3 AM when I have supposedly configure updates to auto install, and not with any warning or chance to postpone or override...  Just, boom!  Programs start closing, Windows logs me out, and "Windows is configuring updates".  Then computer completely reboots, Windows starts back up, and resumes "configuring updates".

My question is, how is this acceptable?  This is the default behavior of Windows.  I have not modified it in anyway, I simply chose "install Windows updates automatically for me (recommended)" during the initial setup of Windows.  Last I knew, that should not sign me up to have my computer randomly shut down while I am using it for something, possibly in the middle of typing a very LONG post on a forum or website.

And what of the only configurable setting I have access to (without making registry tweaks) in control panel, the one that says "Install New Updates: Every Day at: 3:00 AM".  Should this actually read "Install New Updates: anytime Windows wants to?"  My only other option is to disable automatic updates, and I highly doubt Microsoft wants to encourage that.

So essentially the Windows user world is supposed to put up with the possibility that their machine could shut down at any time while they're using it?  How is that acceptable?!

Posted by Scott McGrath at 10:33 PM No comments:

I replaced the regulator in the alternator.  The VW MK4s have a module complete with the brushes and everything, so if you replace this module, 90% of alternator problems are cured.  Unfortunately it was a very tight space and it took me a couple of hours to get to it, but now that it's done, it works.  I uncovered a different way of getting to it, which I posted on the TDIclub.com forum.  Happy to have my car back in action.

I have been working on the appearance update for the car.  I received my new front grill, which I painted:


It looks great, I think it will be a nice improvement for the car.  I also got my new headlights, they are projector style with halo DRLs.  I haven't looked at them a lot, but I think they will look nice.  Lingering concerns involve difficult (running of all the extra) wiring, and more difficult bulb change access.

Still waiting to hear back if my fenders are covered by VW, so I haven't been rushing head-long into disassembling the front end.  However, we are supposed to get a lot of rain over the next week or two, so I may pull the car in for an indoor project.

I've been riding my e-bike again!  After all the battery manager drama, I was anxious to get some numbers so I could find out how much damage the battery took.  Throughout several trips over the last week.  I started a log book so I can keep track of battery performance.  So far I've had one trip where the battery was looking pretty strong - sitting at 52.5v after a good 20 mile trip that used ~10 AH:
...and one where it died and cut out at about 14.5 AH, 72% of what its original capacity was - so, not so good.  I charged up the pack and it seems to have rebalanced itself, so I'm guessing my next trip will be pretty good.  The #1 cell likes to drain itself, so I think if it comes off a fresh charge, it will be strongest.

Been making a few trips out to the beach to drop off these critters:
They have been getting into the garage lately and apparently making a home in there.  So I trapped 2 of them and brought them over 5 miles away, as apparently they have a pretty good homing range.
Posted by Scott McGrath at 10:54 AM No comments: