My steering wheel, being as old and heavily used as it is, was unsuprisingly rotted and has literally become smaller everytime I drive somewhere as it disintegrates in my hands.  I searched around for a replacement steering wheel, and quickly found that to be prohibitively expensive.  There were very few new OEM replacements, and certainly the ones I found were hundreds of dollars.  I really didn't want a crappy slip-on aftermarket steering wheel cover.  So after some deliberation, I finally settled on a pleather, stitch-on cover.   All things considered, it didn't come out too badly: 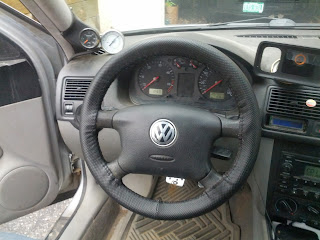 The kit I got cost under $10 shipped, and came with a needle and thread.  I wasn't trying to be cheap, but this one seemed to get good reviews and had everything I needed.  The thread they provided seemed fine - it was attractive and tough enough.  However, the amount they provided was about half what was actually needed, and I found myself having to run to the local craft store after having it half done, trying to find something that was passable.  This was a real bummer, as I wasn't able to find anything that was an exact match. Also, I spent close to 45 minutes hunting around, as the thread I finally found was not with the sewing stuff, it was in a far corner with a bunch very miscellaneous supplies.  I used a thread made of hemp - it was stiffer and a little bit lighter than what came in the kit.  And possibly stronger (?)

The process of stitching on was arduous and, IMO not for the faint-of-heart.  Since I have a little guy, I found myself doing a little during each free chunk of time I had available - about 45 minutes at a time.  I probably spent a total of 2 hours doing, which included pulling about 1/4 of it and redoing it, since I wasn't happy with my work.

Finally when I was done, I ended up using a hot glue gun to touch up the area around the spokes, as the skin  bent up to form pockets around them and wasn't laying down around them sufficiently for my liking.

The finished product looks good, and most importantly, feels great.  Since I drive a lot, my hands spend a lot of time on that steering wheel, so having a nice cover on there makes a big difference.  An item on my rehab list checked off!
Posted by Scott McGrath at 2:59 PM