Happened a little while ago now, but I didn't get a chance to write about it.  The driver's side brake caliper had been dragging for quite some time.  After a trip the wheel would be extremely hot.  I'd been planning to deal with it some weekend, but when I noticed some brake fade, I had to do something.  I ordered a new hub on a hunch, and it turned out to be a good call.
The caliper pins had frozen up causing the brake to be stuck on.  The pads were worn down to nothing.  The heat caused the tone ring (associated with the ABS sensor) to warp.  Since the tone ring is integrated with the hub, I had to replace the entire hub assembly. 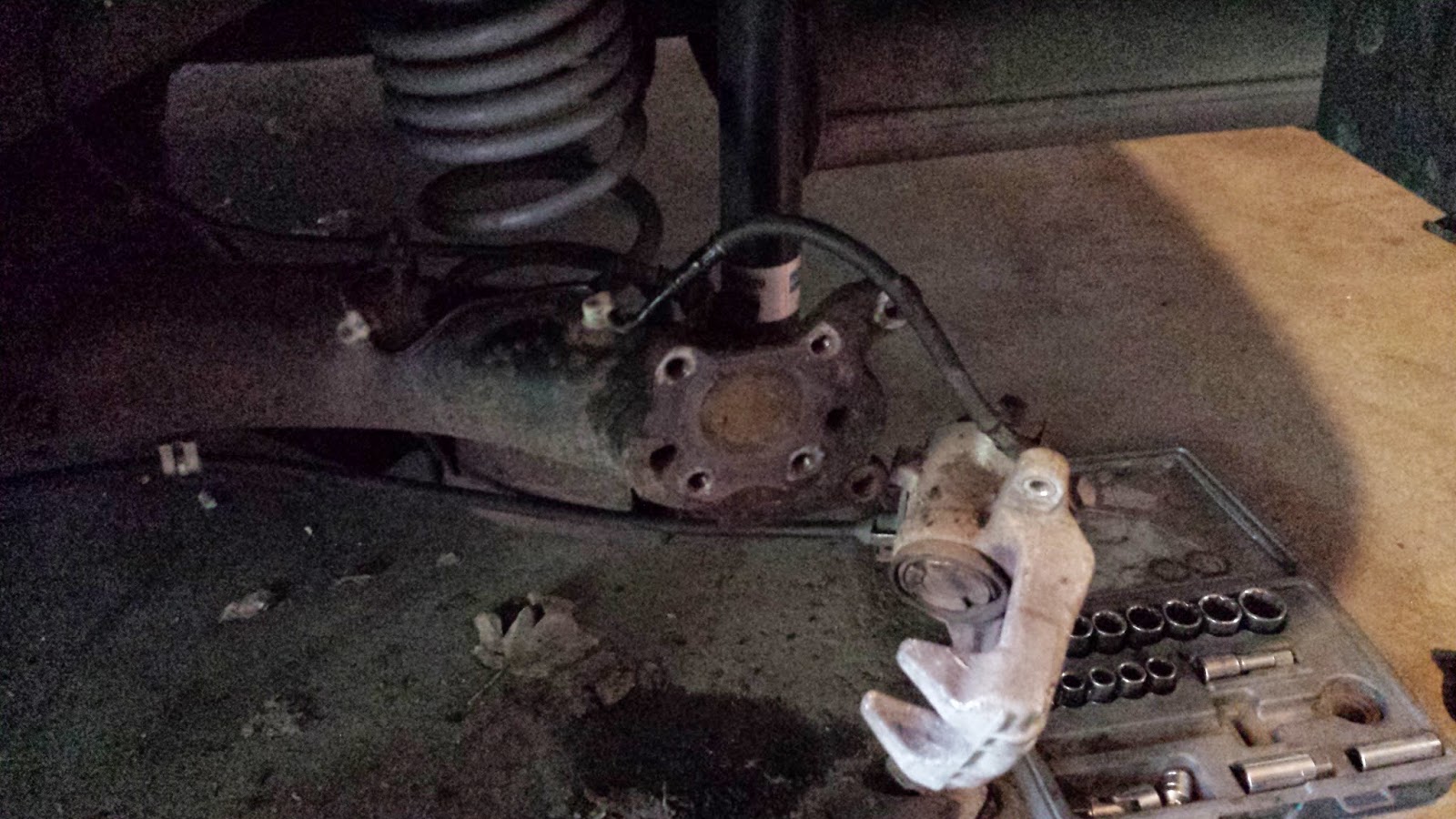 While I was in there I also replaced the splash shield (shockingly, the dealership had this item in stock!  The first time ever). So the whole process went like this:

I did this all in under 2 hours, as I needed to get my car back on the road in a hurry so I could return the trailer I had borrowed.  Then I finished building a deck.

On a philosophical note.

I've spent a lot more time this summer working on my house instead of the car.  The work wasn't really that hard (I didn't have to figure out how to drill out a single rusty bolt), and now we have a beautiful kitchen and a new deck.  I have a great feeling of accomplishment and something that I can share with our friends and family.  Really got me thinking. If I put half the amount of labor I put into my car into my house, I would end up with something that is actually worth money in the end.  Meanwhile, my car just sucks money and time and, if I'm lucky (and determined enough), I am left with a car that will get me around.  I looked at my car log, and the amount of money I've been putting into it for parts alone would pretty much justify the payments on a $20K auto loan.  Add to that the fact that I'm really getting tired of dropping everything so I can lose an entire morning, afternoon, day, or days working on my 12-year-old car.  Even though I love my car, I think the time has come for me to trade up to something that I can "just drive".  When I got my Golf TDI, they were very difficult to come by, but the new ones are pretty easy to find and absolutely drool-worthy.  I've also considered getting a Prius, as they are loaded with tech opportunity.  They get similar mileage, but they run on gas which is cheaper than diesel (at least it has been for about 10 years).  I wouldn't have the option of running on vegetable oil, but it's been quite a while since I've done that, and I probably won't have time to do it again.

Anyway, just something I'm considering.  I'm not in a hurry to do anything yet, and as it happens it looks like the crop of cars I found interesting on Craigslist has sort of dried up.  Meanwhile. my inspection is due and I have a coolant temp sensor to replace.  So for now, tune into the next episode!
Posted by Scott McGrath at 4:12 PM