Why I Got a Chevy Volt

Why I chose the Volkswagen "Buy Back"


Last month, I sold my VW Golf TDI back to Volkswagen.  It was included in the emissions scandal, and I had the option to sell it back for more than I paid for it.  Even though I mostly loved the car, I had my reasons for choosing to sell it back. Here are some of the reasons which tipped the scales for me:

Why I chose the Chevy Volt

I have wanted an EV for a long time now, but at least once a week, I have a 140 mile round-trip commute with no access to a charging station.  The Tesla 3 is out my price range (and, although they are neat-o, the value proposition is just not there for what they are offering).  So I knew I needed a plugin hybrid. Sadly, Volkswagen does not have anything right now.  I considered the Prius Prime and the Chevy Volt.  I settled on the Volt because:
Those are the main reasons.  After some searching, I was able to find a used 2016 Volt (2nd Gen) that is fully loaded.  It was tricky, because the used market on these cars is still pretty sparse.  I had to get it with Carmax and have it shipped.  Next year, these will really start coming off leases and the market will pick up. 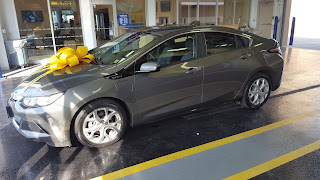 In future posts, I will describe my experiences and thoughts associated with practical use, but so far I have not been the least bit disappointed.

Posted by Scott McGrath at 2:34 PM