My e-bike has been working pretty well, barring some occasional frustrations.  These are chiefly centered around flat tires.  I've had the back tire (the powered wheel) get punctured 3 times now.  The first 2 times I found small pieces of 22 gauge wire, which I'm willing to concede might have come from my garage floor.  The last time, I picked up a carpet nail!  It was right around the construction area on Shelburne road, where they tore up the pavement.  There were lots of little pock marks in the pavement for something like a nail to hang out in, at odd positions.  I learned that getting a flat is worse than having a controller blow up or a dead battery, because you can't even ride it home.  On the bright side, I found out it's an hour walk to my house from Burger King (2.79 miles).  Pushing 70 lbs. of dead weight on a floppy rim, that is.

Could have been a lot worse, I've gone as far as 25 miles from my house before.  I put a spare tube and patch kit in my panniers, in case it ever happens when I am far enough away to justify the effort of a field change.

Besides that, I'm really getting tired of having so much weight on the back rack.  I am constantly sweating hitting even a moderately-sized bump at high speed, and breaking the rack or damaging the battery.  I wish I had a smaller battery for shorter range travel, or perhaps a 15-20AH LiPo pack, which would probably weigh about half as much as my LiFePO4 20AH.  The trouble is that the cost would be around $300-$500, and I just can't justify it right now.  I've been studying tons about LiPo batteries - buying options, how to build a battery pack (series/parallel combinations), charge them, balance them, etc.  Once I know enough, I will probably get into building my own battery packs out of used cells or pouch cells.  If I get good enough at it, maybe I'll sell them. 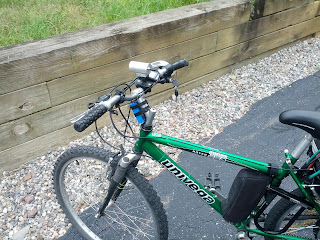 Some good news: I finished my headlight.  It's built out of a 3up Cree XPE, a 700mA BuckPuck, and a snazzy aluminum housing.  I mounted it on a swivel and hooked it up to a small 12 volt LiPo battery pack.  Easily removed for anti-theft.  It puts out 750 lumens, plenty bright enough for night riding at 30 mph!  I plan to sell these for $160 USD.
Posted by Scott McGrath at 10:53 AM