One of the neat things we got as part of our Christmas haul is a Crock Pot.  I've been wanting one for a while, and it was really perfect timing.  We've already made quite a few dishes in it, and it's been going very well.  One thing that kind of sucked was that one outlet in the kitchen (apparently) doesn't work, and it took an hour to find out that the Crock Pot wasn't cooking.  There is no power light on the device anywhere, and the only way you know anything is happening is by the surface getting hot, which either takes a long time to do so, or is so hot that it will burn your hand.  Besides these lengthy guessing games, it's a safety concern when there is no visual indication that the thing is so hot you can't touch it.  Not really ideal.

To complicate matters, I also invested in a simple outlet timer that would shut off power to the cooker in case no one was home to do so.  The timer I got also lacks any sort of on/off indicator, so it's even more difficult to tell whether the crock pot is functioning or not.

A number of possible solutions came to mind, but I finally decided that the slow cooker/crock pot should really just have a power light.

I pawed through my electronics stash in the garage, but found no (working) neon lights.  I did find more than a few LEDs, resistors, diodes, and even a couple of 200+ V capacitors.   I put together a circuit based on the top left schematic in the picture below.
A capacitor acts like a current limiting resistor at 60 Hz, and there is another resistor to limit inrush current when the circuit is first powered on.

Taking the crock pot apart was interesting.  It was amazing how few components are necessary to build these appliances.  The whole thing is held together by a single, large rivet in the center of the heating base.  I drilled out this rivet and the heating base separated into two halves: the stand (which incorporates the legs, power cord, power switch, and an exterior shell, and the jacket with actual heating element.  I soldered the components together, and then electrically insulated and heat shielded my circuit.  I applied heat shrink, followed by a layer of electrical tape, followed by a layer of aluminum stovepipe tape.  I then drilled a hole in the front of the exterior, inserted the LED, and glued it in place.  I used a piece of aluminum tape to attach the circuit to the exterior wall (there was plenty of space).   Reassembly was quite easy, once I found a nut and bolt that were exactly the right size to replace the rivet I drilled out. 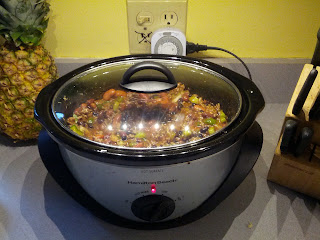 The result looks and works very well.  When I showed it to Susannah, she could not guess what I did, and was convinced it had had a factory-installed power indicator light all along.  Mission accomplished.
Posted by Scott McGrath at 10:18 AM