One of the amazing things about winter in Vermont, at least a normal one is that we typically get a January thaw.  Almost like clockwork, the second week of January will give us a quick break from the brutality of cold, snowstorms, and short days.  Today was one such day, and I decided to venture out on my e-bike once more. 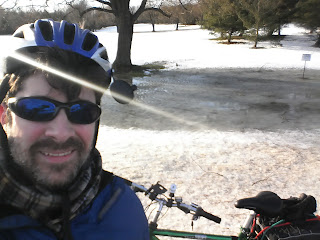 Incidentally, the last few winters have been so far out of whack that we didn't really have anything we could call a January thaw.  Last year ('11-'12) was, I think, the warmest on record.  Essentially we didn't get any snow storms barring, one fairly good-sized one in October.  The entire month of January could have been almost any other month.  The winter before that ('10-'11) was unbelievably snowy (lots of snow all through the winter, then to add insult to injury, we got bombed in March with a storm that dropped almost 3 feet of snow.  If old man winter was playing us in Mortal Kombat, it was a pretty nice finishing move.  I remember in January of 2007, when we first moved into our house, standing outside on the porch in a tee shirt and drinking my morning coffee.  It was in the low 60's, and there was no snow on the ground yet.  The winters of '08-'09 and '09-'10, as I recall, had average snowfall with storms occurring almost once every 1-2 weeks (specifically, each on a Tuesday or Wednesday - the most inconvenient for my schedule as I usually travel on these days.  I became rather bitter about this, and at one point actually started making and winning bets with my friends, e.g. that it would snow on Tuesday or Wednesday.).

Anyway, in the spirit of getting out in the middle of, what has thus far been shaping up to be, a fairly "average" winter (a decent snowstorm, good snow cover, a couple of nights way below zero), I dreamed up and donned a special cocktail of winter coat, scarf, covered by windbreaker, and insulated leather gloves.  My trusty, waterproof Bean Boots completed the outfit.

After a quick test run,  I noticed the water from the road would kick up and sprayed right into my face, especially if I was going fast or into the wind.  I really need to get a front fender.  I put on some eye wear and resolved to keep my mouth closed.  I decided to tighten up my Velcro sleeves, and my wrap sunglasses are always great alternative to goggles.  I also went in to grab some tighter bungie cords, courtesy of my Dad for Christmas.  I've noticed my battery pack getting a little more bouncy each month, no doubt due to stretching of the bungie cords.

The route I picked was one I generally use as a longer test run.  It's not particularly interesting, but good exercise, fair terrain, and 90% bike laned.  I usually set out for a destination, but today I was more interested in getting out then going somewhere special.  I didn't bother charging my battery pack, or putting my watt meter on.  I think the last time I charged it was in early October, when we were getting ready for the hurricane.  My trip odo showed 7 miles, which I attribute to a short ride taken before I put the bike away for the season.  Plenty left for this route, which is about 7 miles.

The temperature started around 42, and actually rose to 45 by the time I returned.  The wind from the south was probably 15-20 mph sustained when I got to the higher plain of Spear Street.  It becomes pretty obnoxious to travel any faster than 18-20 mph with that as a headwind; imagine standing face-forward in 40+ mph winds.  The volt meter visibly shows the extra effort, and you start to get an ear ache.  I was pedaling a lot to stay warm and try to get some exercise (since I put my bike away for the winter, I've gained almost 20 lbs. - another great thing about Vermont winters).  Despite the windy weather, I have to say that overall, my upper body stayed very warm thanks to my outfit.  The winter coat provided insulation, and the windbreaker provided a seal against the wind.

One of the things I love about bicycling, is that it combines the intimate pedestrian perspective with the reasonably fast pace of a car.  It's the best of both worlds.  I could drive around a town in a car for an hour and still have no idea where I am, but once I have biked around in a town, I will never get lost again.  As I traveled along today, I saw a few other (ped-power) bicyclists and runners.  It was a neat change to see everything surrounded by the backdrop of the wintery scenery.  The rapidly melting snow made the notion of puddles obsolete, as the road was usually covered with an even film of water that sprayed everywhere as I rode through it.  I thought to myself, if I was ever to learn of my bike system's vulnerability to water, today would be the day.

I noticed the pack voltage getting down there on the way home - judging by the volt meter under full load, and my experience, I'd say around 40%.  Probably nothing unreasonable for 15 miles of hard, windy fall/winter riding, not to mention 3 months of sitting on the shelf with no charging.  Back home I checked out the bike.  Everything that mattered seemed dry enough, including myself.  The down tube blocked all the direct spray from hitting the controller.  The forecast for tomorrow is 50+ degrees.  At this rate, we'll lose most of our snow cover by the end of next week.  But have no fear, there are still plenty of Tuesday and Wednesdays left in this winter season.

Posted by Scott McGrath at 8:55 PM

Email ThisBlogThis!Share to TwitterShare to FacebookShare to Pinterest
Labels: e-bike