Well, I was going to update this the other night, but sometimes there's only enough time to work on the car.  So a few things have happened since my last post: for one thing, I got the old gears off. 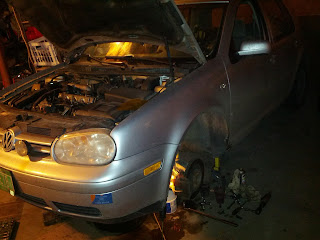 As I mentioned, the needle bearing on the large gear had failed.  I was able to get a replacement from 1-888-VWTRANNY .  I was impressed - they shipped it fast (I ordered it Saturday and had it Monday, which was a day earlier than the dealership could get it). The price was cheaper than the dealership, even with shipping.

The other challenge was getting the bolt out of the smaller gear.  I ended up putting it in 3rd, having my wife step on the brakes while I leaned on a breaker bar coupled to a very long pipe, and every 1/2" extension I could find in the garage, to extend outside the fender.

Upon removal and inspection, the small gear was definitely not much of a gear at all anymore.  More like a lump of steel.  This is what happens when your tranny runs out of oil ladies and gentlemen:

After I got the gears off, the next challenge was trying to figure out how the selector gear, sleeve and syncro are supposed to go together.  I took it apart, but honestly it kind of all fell apart when I pulled it off, and I didn't get a great chance to study it.  I brought the parts around with me a in a plastic bag and after a day or two I finally figured it out.  A big help was reading and digesting this post from brokevw.com.  I had to fully understand the mechanical operation before I could put everything where it was supposed to go.  Kind of a tough, long read but I got through it.  The page was written for an 020 tranny (the kind in busses and bugs), so some of the parts look slightly different than the 02A/02J, but the concepts were identical.

I wish I had gotten more pics of the finished assembly, but I was pretty happy to finally get the thing together and buttoned up.  If people are interested in a write-up on it, let me know and I'll do one.  I started the car and quickly ran through all the gears (the tranny's probably had enough of running without oil by now).  The wheels turned, and nothing blew up.

Next I to find the leak.  I dumped in 2 quarts of Redline MTL, and gave it a 2 min. spin.  Again I tested all the gears.  It was sometimes a little hard going into 5th (about 1 out of 4 times) but I think that might wear in after a while - there are some new parts there.  After the run, I looked under the car, and lo-and-behold, there was drip, drip, drip from the driver's side shaft seal.  Time to drain the oil again and get that changed. Should be interesting, I've only ever changed the passenger side seal.  Hopefully this one is a little easier than that - it's possible, as I don't think I'll have to undo the lower ball joint connection.

Posted by Scott McGrath at 3:12 PM