The Probe awakens early from its winter nap

Well just when I thought I'd finally gotten past this auto maintenance nightmare... What was only supposed to be an exciting couple of weeks in incoming baby-world (my wife is due next weekend), I have spent basically dealing with my cars.  I'll try to summarize the story as simply as possible. 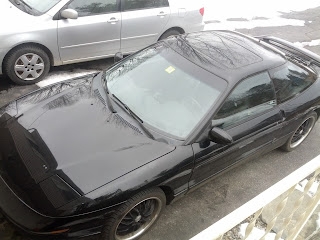 One morning last week, I went to drive off in the Golf, and the transmission seized.  Apparently it (once again) lost all of its gear oil.  I put more gear oil in and got the transmission unseized.  Very lucky, but obviously I still have a major leak to find and fix.

I don't think I have the tools to get the seal to go in straight, so I'm bringing it back to the dealership to have them change the damn output shaft seal, as I request.  No more red herrings.  I even preemptively called their parts department and ordered the seals myself, anticipating that they will look at the car, and THEN say "the seals aren't in stock", order the seals, and force me to wait yet another week before they do the work.

Meanwhile, because I need a car and I'm sick of renting, I decided to consider my Ford Probe (summer fun car, with other issues) as a possible mode of transportation.  The winter in Vermont has been very persistent, as we near the end of March and still seeing 20-30 degree temps and occasional snow,  no end in sight.  However, they haven't been salting the roads, and things are staying clean enough that I wouldn't feel too badly driving the Probe around.  So I got it unburied and assessed its needs.   Here's what I got:

That said, the thing started right up and ran like a champ.  No sign of any ignition problems.  I refilled the coolant and changed the fuel filter (major PITA, took over an hour and as a bonus I got gasoline in my eye).  I picked up a crankshaft position sensor they actually had in stock at a local autoparts chain (that was a huge shocker!).  I'm not sure if I even need it, at this point the car is running perfectly.  I am half hoping it will act up in the next couple of days so I can try changing some stuff, although I'm really not looking forward to doing any more work in the cold.

The CV joint I'll run until it's ready to break.  It's not cost effective to change boots these days, and it's the same amount of work to replace the entire axle.

I did some research and found the rear valve cover gasket is a real big deal.  Involves removal of intake manifold, replacement of that gasket, and a bunch of other seals and gaskets that might as well be changed while you're in there.  Not to mention it will be at least a 5 hour job - most likely a whole day for me.  I haven't done any real work on the Probe in a long time, mostly because with the V6 everything is crammed so tightly into that engine bay that it's even less enjoyable to work on than the VW TDI (if that's possible).

For now I'm just happy to have some mobility without a rental car.
Posted by Scott McGrath at 12:45 PM