Hydrogen is a widely misunderstood fuel. 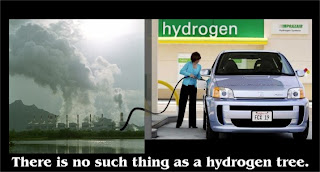 Often I'm asked why I'm a proponent of vegetable oil as a fuel, rather than a fuel that doesn't emit CO2, such as Hydrogen.

Carbon neutrality is more important than to zero CO2 emissions at the tail pipe. Hydrogen is no more a fuel than are the batteries of an electric car- you put energy (electricity) in to make it, and it's then just a carrier of that energy for a vehicle. If the Hydrogen was produced using electricity from a nuclear power plant or coal plant, you still contributed new CO2 to the atmosphere.

Using plant mass as a fuel, however, is carbon neutral. When plants grow they convert CO2 to oxygen- the same amount that will be turned back into CO2 when it is used by cars. Thus, you could accurately say that a veggie car is, in some cases, less of a CO2 contributor than a Hydrogen car.

The promise Hydrogen offers is that of a better fueling infrastructure: one that will centralize energy conversion (and thus any CO2 production) to one location and source. Right now every single car is a separate problem, even if there really was some other choice (for the masses) to use instead of gasoline. When we convert fuel sources to clean energy carriers at one centralized location, the problems with those fuel sources become much more simple to deal with. For example, a hydrogen plant could, at any given time, be fueled by contributions from any or all of the following sources, based on supply, demand, and other various factors:

So, while Hydrogen offers a lot of hope for improvement in the future, the CO2 impact of using hydrogen itself is not really comparable to using vegetable oil to power your car. Furthermore, the benefits of Hydrogen are still a *long* way off.
Posted by Scott McGrath at 2:06 PM No comments: